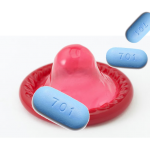 The introduction of PreP seems like a revolution of sex.  My generation entered sexual age with the notion that condoms are just a part of sex life. Sex without a condom was like drinking alcohol and driving.  HIV was a real threat. On the other hand HIV-positive individuals felt marginalized and stigmatized. So called “serosorting” was a real thing, where HIV-negative individuals refused to have sex with people with known HIV-positive serostatus. Even though when these individuals were on optimal HAART and viral loads were undetectable or condoms were used and the risk to contract HIV was non-existing, the fear of HIV was too high to take the risk. Then there is a minority of 10-30% that refuses to use a condom and that rather take the risk of becoming HIV infected or do not care about contracting HIV. There are also some that are forced to have sex without a condom by their partner, for goods or were involuntarily forced to have sex. A thin layer of latex was seen as the ultimate protection between staying HIV-negative and the life threatening event of becoming HIV-positive. Now there is a pill an HIV-negative individual can take to prevent him or her from contracting HIV in the event of exposure. This so called pre-exposure prophylaxis (PrEP) is a daily pill (Truvada) consisting of two HIV drugs Tenfovir-disoproxil and Emtricitabine. Studies have shown that when taken correctly PrEP can prevent HIV infection near to 100%. Taking PrEP is like being on a birth control pill, where you take it every day or before and a few days after sex that day.  While yet not accessible in every country, the discussion already quickly became emotionally heated between those that promote condom use as a way of protection and those that call for PrEP as the ultimate HIV prevention method.

The question is: can PrEP really replace condoms?

The answer to this is very clear: no, it cannot. The WHO recommends “[…] that people at substantial risk of HIV infection should be offered PrEP as an additional prevention choice, as part of comprehensive prevention package.” However, this does not mean that PrEP should generally replace other prevention methods. Instead PrEP should be offered to those who cannot protect themselves by other means, and those who have a track record of not protecting themselves by other means. In other words, in the developing world, PrEP could potentially be an option for women who are not in a position to refuse sex to an infected partner and whose partners may be unwilling to use condoms. Likewise, to guys that show high-risk behavior, refuse condoms or repeatedly forget condoms. The reason that PrEP cannot replace condoms is as logical as simple: PrEP prevents HIV but only HIV. Gonorrohea, Chlamydia, Syphilis are all on the rise, where PrEP has no activity against it. In the IPERGAY study in France that most recently demonstrated again the efficacy of PrEP a shocking 30% had a sexual transmitted disease. While those infections are treatable, they can become nasty if not diagnosed early including arthritis, cerebral problems or cardiovascular complications. Moreover, multi-drug resistant bacterial strains are on the rise making the treatment of those infections much more difficult.

Another important issue is that recent reports of drug-resistant strains of HIV are currently emerging, where infection can occur despite being on PrEP. There are several reports and while it is still unlikely that infections with resistant viruses under PrEP occur, the fact that they can occur leaves some doubts about only relying on PrEP to prevent HIV infection.

While there are many more arguments for or against PrEP including potential side effects and current requirements for kidney monitoring, it will be most certainly an important addition to the HIV prevention toolbox in particular to those that are currently unprotected. However, we need to be clear, that it is not an alternative but a supplementary measure to condoms.