Streeck Lab fired up about recent findings in Nature Medicine: HIV preferentially infects CD4 T cells and in particular those that recognize HIV. 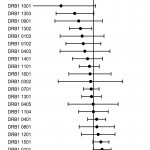 The primary role of CD4 T cells is to help other cells and orchestrate the different arms of the immune system. Their importance is best illustrated by how completely the immune response collapses after most of the CD4 T cells are destroyed. This stage of HIV infection is known as AIDS. Given their preferential infection and depletion, HIV-specific CD4 cells have not been a major focus of vaccine research. However, these cells may still have an important, unappreciated role in controlling HIV infection.

Published June 23rd (Advanced Online Publication) in Nature Medicine a team of researchers lead by Hendrik Streeck now demonstrate that HIV-specific CD4 T cells, despite their role as target cells, may play an important role in controlling viral loads. In a cohort of over 1000 chronically HIV infected individuals the authors show that certain HLA class II alleles are associated with HIV control, while others are associated with rather rapid disease progression. They also found that the HLA class II alleles that are associated with HIV control also restrict for a greater number of HIV-specific CD4 T cell responses, but bind those with lower functional avidity. In contrast, the HLA class II responses associated with rather unfavorable disease course restrict for less HIV-specific CD4 T cell responses but bind those with higher functional avidity. The Streeck lab now follows the hypothesis whether HLA-DRB1 variants linked with low viremia may bind at lower avidity and may show greater promiscuity in their peptide interactions as compared to those associated with high viremia. Given this strong association the Lab hypothesizes that HIV-specific CD4 T cell responses recognizing HIV peptides with high specificity and avidity reach a higher activation status and are therefore more susceptible to HIV infection or activation-induced cell death. 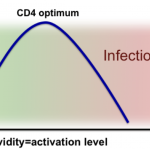