Why is there no Ebola vaccine?

– One of the foremost problems in developing an Ebola vaccine, is the scarcity of Ebola outbreaks that would enable testing the an Ebola efficacy. In fact, since the discovery of Ebola in 1976, there has been fewer infections in the last 40 years than in the current 2014 outbreak. Previous to 2014, the highest number of Ebola infected individuals was in 2000-2001 with 425 affected patients in Uganda. (See graph below for infections over the past 40 years.) 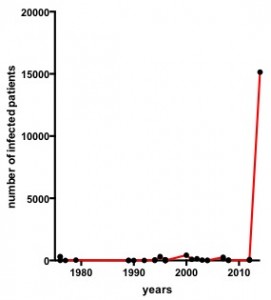 – Another main concern is the deadliness of Ebola. This attribute normally causes the virus to contain any potential epidemic, thus leaving little to no room for researchers to perform studies. Moreover, researchers must work with the virus in special facilities with high-level safety precautions, which limits the number of experiments that can be done.